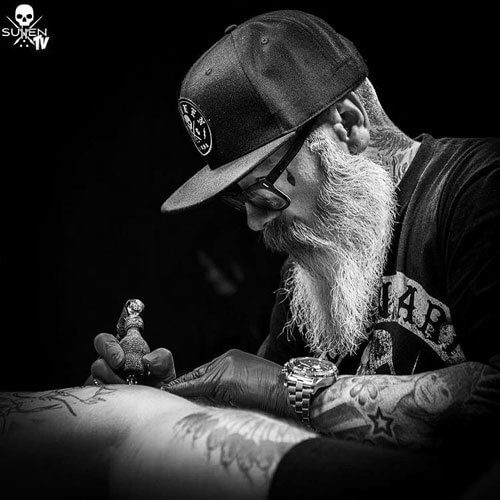 Who is Arron Raw?

If you travel off the beaten path in a small town called Kearsley near Bolton, England, you will find a hidden gem that can be described as one of the best tattoo shops in the UK and its owner, Arron Raw.  He is arguably one of the best black and grey tattoo artists in England. Arron specializes in dark black and grey realism but often has a surrealist twist to his work.

Before His Career as a Tattoo Artist

Although he was interested in art and showed artistic ability from a young age, his journey as an artist did not start with tattooing.  His first endeavor out of school was an apprenticeship as a traditional sign-writer in the commercial vehicle and signage industry.  This lead Arron to start his first business as a professional sign-writer and graphic designer.

It wasn’t until 2011 that his passion for tattooing led him to shift his focus to open a tattoo studio in his hometown.  Raw played with color in his early career, but as time went on and he honed his craft, he eventually gravitated toward working with just the black and greys that he is now known for.

Though Arron Raw has traveled the world and can be seen at many tattoo shows and conventions throughout the UK, he doesn’t stay far from home for long.  He still lives in his hometown and considers his family very important.  In a SullentvHotSeat interview, he was asked “What is one thing you can’t live without?” and his answer was “Family.”  If he had only 24 hours to live, he would spend it with his family. And if that isn’t wholesome enough, his favorite movies of all time are Forrest Gump and Mary Poppins.  When he isn’t tattooing or spending time with his family, he can be found eating vegan burritos, cheering for Manchester United, and maintaining his glorious beard.

Quantum Tattoo Ink is honored to have partnered with Arron Raw in the creation of the Skull & Bones Gray Wash Set.  Now you can use the same vegan, organic black tattoo ink as one of the world’s best black and grey tattoo artists. The black tattoo inks and gray washes can be purchased individually or as a set. The line includes black tattoo inks for lining, fill-in, and solid blackwork  as well as four “Death (gray) Washes” that range from 25-100% for a full variety without mixing.  The set also includes a bright white tattoo ink, White Noise,  that can be used on its own or added to a gray wash for an opaque look.

Your cart is empty.